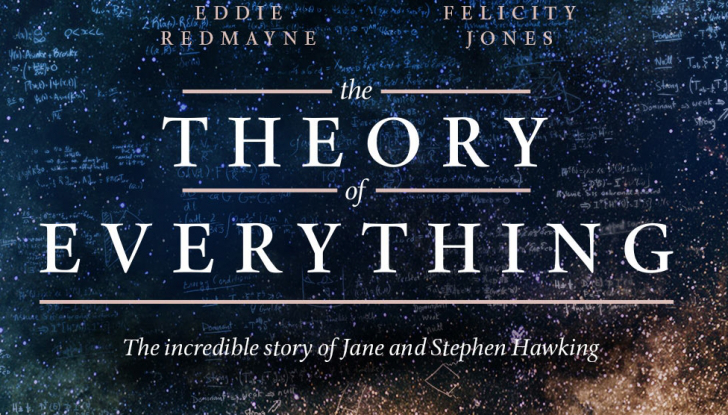 The Theory of Everything is a 2014 British biographical romantic drama film directed by James Marsh and adapted by Anthony McCarten from the memoir Travelling to Infinity: My Life with Stephen by Jane Wilde Hawking, which deals with her relationship with her ex-husband, theoretical physicist Stephen Hawking, his diagnosis of motor neuron disease, and his success in physics.
The film stars Eddie Redmayne and Felicity Jones with Charlie Cox, Emily Watson, Simon McBurney, Christian McKay, and David Thewlis featured in supporting roles. The film had its world premiere at the 2014 Toronto International Film Festival on 7 September 2014.

The Theory of Everything is about the story of the physicist Stephen Hawking and Jane Wilde, the literature student he fell in love with while studying at Cambridge in the 1960s.
Though Stephen is told he has just two years to live and wants to focus on his research, Jane is set on sticking by his side through thick and thin. What follows is the story of their love, Stephen’s research and their perseverance against adversity.
Below is a beautiful quote from the film – The Theory of Everything:
“There should be no boundaries to human endeavor. However bad life may seem, while there is life, there is hope.”
“The weight of science is against you. And this will not be a fight, Jane. This is going to be a very heavy defeat, for all of us.”
“I don’t look like a terribly strong person. But I love him, and he loves me. We’re going to fight this illness together.”
Extra material on Stephen Hawking:
Stephen Hawking opens Paralympic Ceremony
P.S.
Congratulation to Eddie Redmayne for his win in Oscar 2015 Best Actor award, besting worthy contenders including Michael Keaton (Birdman) & Benedict Cumberbatch (The Imitation Game)
Splendid performance for his portrayal as Stephen Hawking!!!